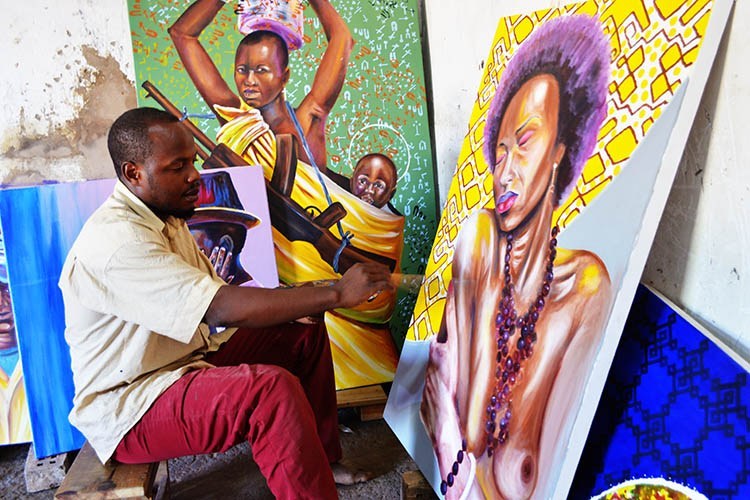 The installation designed by Daddy Tchikaya revisits the globe in the light of the ecological crisis generated by progress and technology. Both induce a change in the way of life of the Congolese who according to the artist, formerly maintained harmonious links with nature and are now slow to take the measure of the impact on the environment engendered by their new consumption habits.

The terrestrial globe designed by Tchikaya illustrates his concern over the growing disconnection with the land in the DRC. In an increasingly interdependent world, however, the environmental issue in the Congo must be everyone’s business, just like the different species that collaborate with each other. For Daddy Tchikaya, any inanimate or animate entity, and more particularly living beings, are interconnected. The egoism of our materialistic age is no longer appropriate since the other is an integral part of ourselves. Its joys and pains are connected to ours and in our globalized society, the compassion and the love felt towards each one, are sources of individual and collective benefits.

Daddy Tshikaya (°1986, Lubumbashi) is a visual artist trained at the Academy of Fine Arts in Lubumbashi. He has participated in numerous collective exhibitions at the contemporary art gallery “Dialogues” in Lubumbashi. In 2004, his works are part of the exhibition titled “Nguyu ya Kazi” at the Royal Museum of Central Africa in Tervuren, Belgium. Two years later, he received the first prize in the United Nations AIDS Contest. In 2009, he organised his own personal exhibition “Nani Na Nini” at the Halle de l’Etoile in Lubumbashi and at the Halle de la Gombe in Kinshasa. In 2010, his works are included in an exhibition organized by the Asbl Dialogues and the Rachel Forrest Foundation following a donation of monumental sculptures to the City of Lubumbashi, on the occasion of the celebration of its centenary. Several solo and group exhibitions in Congo and Belgium have strengthened Daddy Tshikaya’s career as a visual artist.