Configurations is a research project that Hadassa Ngamba initiated through the analysis of the cartography of Congo, perceived as the result of the colonial conquests of lithospheric lands and plates in Central Africa. Cartography is thus envisaged as a metaphor for dissecting Congolese configurations invented and standardized by modern fantasies. To do this, Ngamba carried out a form of investigation throughout the Kongo Central province, during which she collected a great deal of information leading her to conclude that in the colonial era, Congo had been built as a vast production plant to products for export. In the case of Kongo Central, the production is based on energy brought through the Inga dam. On a canvas, the artist has used and multiplied the logo of the company that exploits the dam, by painting the different colors of Congo’s flags since independence until today. In its ultimate reinterpretation, the red and the black of the logo testify to the hopes of Ngamba despite the chaos that reigns in her country. Configurations is also available in multiple mediums: cards, paintings, installation, experimental sound mixing, red wood trunk and photography.

Born in 1993 in Kizu in Kongo-Central Province, Hadassa Ngamba is a Congolese visual artist who lives in Lubumbashi and works between Katanga and Kongo-Central. She studied at the University of Lubumbashi at the Faculty of Criminology. She exhibited her first works as an artist at the 5th Biennale de Lubumbashi in 2017, after an educational workshop led by Toma Muteba Luntumbue, Sammy Baloji, Sandrine Colard and Yves Robert.

During her childhood, she lived in an environment marked by colonial memories and the genesis of Congo’s independence (Boma). Witness and co-victim of male abuse on her mother, she seeks personal and collective responses to issues related to the colonial memory of her country and the balance of power. In her work, she tries to redefine the fallacious stereotypes linked to the identity rooted in the time and space of Congolese society.

The work of Hadassa Ngamba consists of styling and hairstyling techniques, drawing, painting, photography, video and performance. In her practice, she uses wax as a genealogical language device of conceptual colonial memory and malachite as an element of questioning on Congo’s economy through Katanga, the region where she currently lives.

Considering her personal history as a starting point to approach that of the Congo, the work of Hadassa Ngamba is part of the reconfiguration of the colonialist router installed in the history of her country, by disrupting the protocols of this one, and a regeneration of the autonomy of dialectical power.

Hadassa Ngamba was artist-in-residence at WIELS Contemporary Art Centre in Brussels from January to March 2019. She is the Prize winner of the 2019 Lubumbashi session of the Laurent Moonens Award and her work was completed with the support of the MOONENS Foundation. Her participation in the biennale is supported by Wallonie-Bruxelles International. 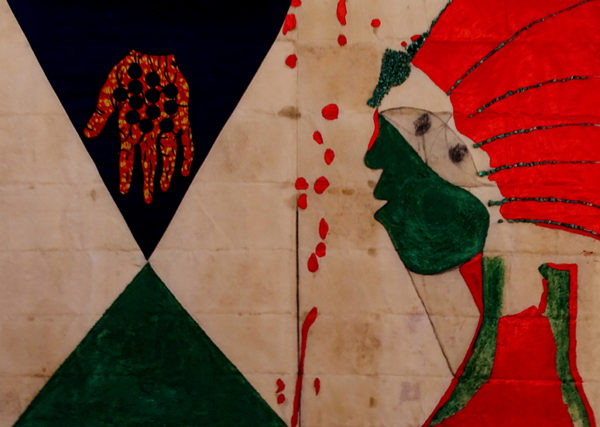