In The Shadow Of Ghosts 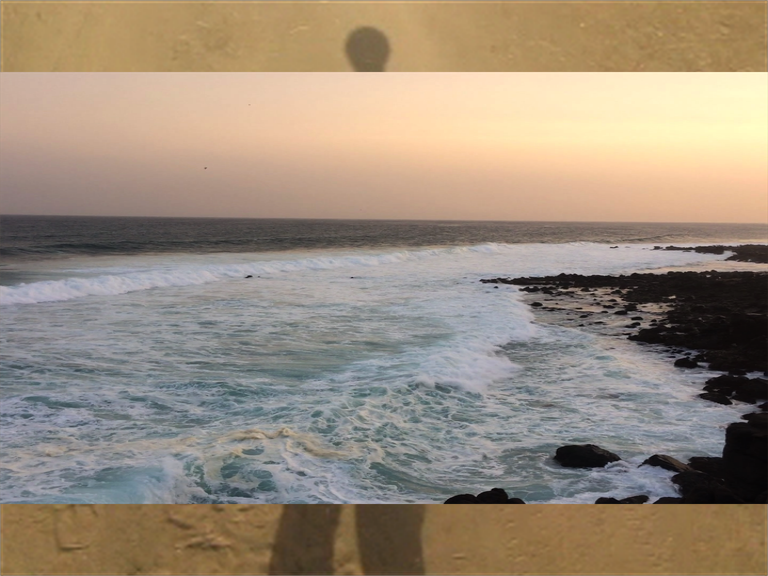 The film is composed of notes on a film to be made and an essay to be written. April 29, 2006, a twenty-foot boat was spotted off the southeastern coast of Barbados. On board, eleven bodies were found by coast guards, preserved and sun-dried. The ghost ship was drifting for four months on the Atlantic ocean. It left from Praia on Christmas day, on the Cape Verde Islands, filled with migrants from Senegal, Guinea Bissau and Gambia en route to the Canary Islands. Each of these men paid £ 890 for their place on the boat.

The story is based on materials and tools available to make sense of the complicity of meteorological conditions, ocean currents and state violence during the ship’s voyage. The gap between the film and the form tests the ability to measure the narratives and affects related to the passage, the language to highlight the materiality of the sea and the incommensurable horror contained in the figure of the ghost ship. The narrative construction of the film and its imagination are based on two families of images. The first family of images is articulated around the world of the sea, the myths about the water between Africa, the Caribbean and Europe. While formulating a critique and deconstruction of imbalances that may exist in the economies and state policies that govern this natural habitat.

The second family of images is an attempt at dialogue between the walker and his shadow. It is not easy to imagine the time spent by the migrant to walk, alone in the desert and then in the cities for those who arrive at their destination. The loneliness of the walker in front of or with his shadow, the dialogue between the walker and his shadow are unique and intimate moments. Rare moments, even precious, facing a choice. So much so that it is probably useless and vain to tell it in any story. This is where we launch into our collective imagination.

Hamedine Kane is a Senegalese and Mauritanian artist-director. He lives and works in Brussels and Dakar. For the past two years, his work has focused on the subjects of exile and wandering. His artistic practice evolves in relation to the context in which his work is situated, leading him to take a more acute look at public spaces and to consider them as places where interaction and encounter take place. This year, he starts a new series on the heritage, memory and awareness that flow from the political experience of some post-independence African countries, entitled “The Permanent Revolutionary Becoming”. Questioning this recent period in the history of Africa, particularly Senegal, led him, after ten years of exile in Europe, to undertake more and more frequent trips to Senegal. This approach implies having a view on rather specific subjects, such as architecture, history, geography, urbanity, and, from there, creating links towards a more inclusive approach. Thus, he began to take an interest in the Ponty School in Sébikotane between the Thies and Dakar regions, insofar as the existence of this institution, from 1855 to the present day, testifies to the aspirations and upheavals that Senegal has been undergoing since the last century and crystallizes opinions around the notions of Afro-utopy and Afro-nostalgia. In the same vein, Kane is also interested in the influence that African, African-American and Afro-Diasporic literature and its authors can have on today’s political and social environmental commitments.

Kane’s latest works were exhibited at the last Dak’art Biennale under the direction of Simon Njiami, at 1:54 Contemporary African Art Fair in London in 2017 and at document 14 (“Every Time A Ear Di Sound” curated by Bonaventure Soh Bejeng Ndikung, Elena Agudio and Marcus Gammel). In 2018 his work was the subject of a solo exhibition in Mumbai at Clark House Initiative, commissioned by Sumesh Sharma, with whom he continued a collaboration at The Showroom in London. In 2018 Kane also exhibited at the FIAC and the Colonie barée in Paris. In 2019 he will take part in the Oslo Triennale of Architecture and the Guetto Biennale of Port-au-Prince in Hatiti and the Parcours8 in Dakar.

With thanks to Raw Material Company, The Showroom and Marie-Helene Periera. Produced by Clark House Initiative, Bombay. Funded by the Foundation For Art Initiatives, Judith Blum and Krishna Reddy Foundation.