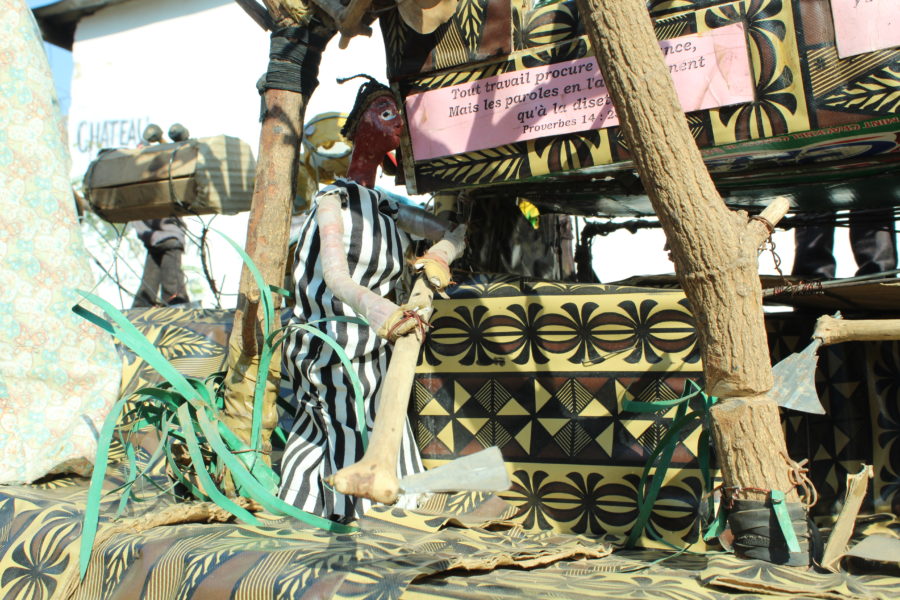 Dibwe stages a miniature village built with clay, plastic and wire, which reveals various places reflecting everyday life. Objects related to the function of these spaces are also present in each of them. The kitchen is equipped with a cooking pot, a mixer and a mortar, the church of drums and a guitar, the field of hoes, axes and machetes, the gyms of balloons and bodybuilding apparatus, while a table, a pencil, a notebook and a puppet doing a drawing are placed in the school. 26 puppets which are connected by an axis of three meters, are placed in these different places and activated all at the same time by a system of leverage that Justice Kasongo Dibwe activates to make them go to the occupations proper to their respective spaces. Through this device, the artist wishes to remind spectators of the importance of using their talents and showing and teaching African cultures. Dibwe can also be used as a didactic support for teachers to stimulate children’s creativity in verbs learning, by visualizing them through the actions performed by puppets. Finally, the miniature village placed on a cart, can be used during events.

Justice Kasongo Dibwe was born in Lubumbashi in 1976. He is the youngest of a family of twelve children whose members are currently scattered far from the city of Lubumbashi. He is father of a daughter. So rolls the world. Justice learned the pedagogical humanities before finishing his degree in Computer Science and practicing as a teacher in computer science and English. In the course of time, Justice always nourished his ambition, his determination and his vision to concretize his presentiment of ingenuity in a sense of resistance against the march of a society in which the proportional is a little eccentric.

Justice begins experimenting with building puppet-singleton dolls. As the result of the animated puppets proved conclusive, he decided to dedicate a part of his income to purchase materials and tools to broaden his field of conception. Round iron, iron and copper wire, glue, fabric, clay, line rope, paint and plastic are some of the materials that are part of his arsenal.

Thus was born the cinematic chain of puppets that can be called “Cinémionnette” or “CINEMAR” and which displays a repetitive and synchronized animation of characters and scenes of everyday life. For the moment, while castigating the limits of imported toys, Justice claims to address the history of African culture even if some scenes on his stage seduce the borders of the contemporary era. Justice travels the streets of the city of Lubumbashi with his cart, exchanging the performance of his puppets against a few currencies and hoping to make a decisive meeting one day.

Justice insists that his inspiration remains original even if in different angles his work is similar to the practice of Kura, Kingelez, Motalatala, Nimi, Odon, Richard, Frank and Harald Thys & Jos De Gruyter who exhibited in the Belgian pavilion at the last Venice Biennale. 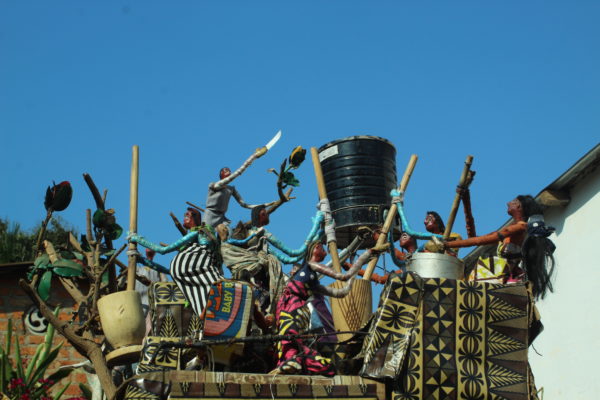 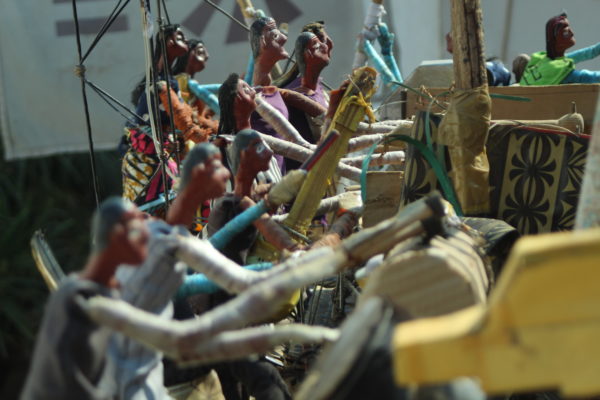